It has been a long time since I wrote an article, more than a year acutally, and finally I thought today is time for me to write about the “wonder” of FUKUS Casino “Capitalism” and paid “democracy” which is responsible for the “wonderful” state of this entire world as it stands today.

Before I describe the “wonders” of the FUKUS Industrial Mass Production Trickle Down Casino Capitalist System, I will first mention my solution of Rising Tide Production by the Masses Socialist Capitalism.

Before I describe the “wonders” of the FUKUS paid “democracy“ , I will first mention my solution of SWARAJ – True Freedom and Democracy.

Since 2003, I have been following the “wonders” of FUKUS Casino “Capitalism” and paid “democracy” .

What ever I saw will happen way back in 2006 and predicted in my writings which germinated as far back as 2006 came true in 2022 and will continue to come true for the rest of my life and beyond.

As I wrote way back in 2009 after the 2008 great financial crisis in my article about “wonders” of FUKUS Casino “Capitalism” , Bharat is now at a very critical stage. It was at the stage that America was in the 1750-1850.

Unfortunately for America after 1850, Lincoln won the war of the states and set the course for the ruin of the USA to be led by Wall Street Pimps and “paid” democracy.

America is a cursed land ever since the genocide of the Native Americans took place and will serve as an example of what should ever never be repeated in history.

So though this article may seem revolutionary and put me in risk in the short term in Bharat, according to the prophecy of the advent of the Satyuga in the long term by 2023 the universe and Brahman(God) are on my side.

And as I have always said and had faith in:

The people of Lanka deserve every bit of what they are getting today. They committed genocide against a noble Tamil people and murdered a true gentleman and patriot Prabhakaran and even his 12 year son in cold blood.

And the same Rajapaksha family who were the murderers of such noble people like the Tamil patriots and freedom fighters were idolised by the Sri Lankans finally ended up having their houses burnt after burning the country to the sorry state it is in.

Feku and his Chanakya are the Rajapakshas of Bharat and will meet the same fate as them, their fate is inevitable and they deserve every ounce of what is going to befall them.

All that will happen by 2023 when the biggest Dalal Street Pimp finally defaults on his huge loans.

Once the biggest Dalal Street Pimp, who is now the fourth richest man in the world, defaults on his loans, within 15 days all the puppet PSU banks which have till today not disclosed how much they have lent to the the biggest Dalal Street Pimp, will probably freeze all deposits and then the circus will finally stop and millions or possibly tens of millions of people who believed these shady scamsters and criminals and bank with these shady PSU banks will not have any money even to buy lifebuoy soap to wash hands after going to the toilet.

I will now outline why this is going to happen.

The shocking story of Gautam Shantilal Adani — the biggest Dalal Street Pimp and symbol of everything that is “wonderful” with FUKUS Casino “Capitalism” and paid “democracy“.

Article from Hindenburg, one of the worlds most professional short sellers

Adani Group: How The World’s 3rd Richest Man Is Pulling The Largest Con In Corporate History

The only magazine in Bharat with the guts to write about the biggest Dalal Street Pimp is Caravan Magazine — you can read their articles on Adani here.

Another magazine that had some guts to write is Bloomberg: Four Funds With $7 Billion in Adani Have History of Wrong Bets

Another magazine that had some guts to write is Business Standard: Gautam Adani and his fortune drivers deserve keener spotlight, scrutiny

Out of the top 25 shareholders list, Albula Investments Fund Ltd is listed in https://offshoreleaks.icij.org/search?q=albula+investment+fund&c=&j=&d=

One of the biggest holders was Cresta Fund till the Bloomberg news broke — Read their filings. Is it very suspicious?

Now after the Bloomberg news broke they are no longer among the biggest holders as per Simply Wall Street records . They are not even listed among the shareholders.

I am sure that an experienced scamster digger can find out where there shares went and to whom — I also recall one of the companies I did research on in UK based Adani FPI mentioned in Bloomberg news – it had a single African name which you could not find any details on the internet and capital of less than GBP 1000 and it invested Rs 1400 crores in Adani group — that also is missing now.

I have attached a valuation comparison of Adani Enterprises which is still basically a coal trader.

I have also attached the absurd run up in valuations of all Adani group shares from 2020 to 2022. 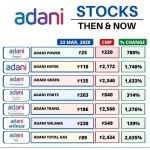 They are most ramped up valuations in Indian stock market and still very few established FIIs like Vanguard or Blackrock have any significant holdings in any Adani Group companies.

I am sure that an experienced scamster digger can find out that most of the ramping up is done by offshore operators and shady FII investors who are basically black money recyclers of some very powerful people in Bharat.

Basic rule in bonds is the same as stocks.

Bond and Stock prices go up when people have faith the company is strong and then there are more buyers than sellers.

Bond prices fall when people lose faith company is weakening so there are more sellers than buyers and prices fall.

This is mainly because investors in bonds are professional lenders who are seasoned investors and only go by facts and figures and investors in stocks include uninformed retailers who go by headlines, MBA marketing and hype by the MBA trained managements of these shady companies.

Incidently in my dictonary, MBA does not stand for Master of Business Administration.

For the majority of our FUKUS democracy DFI politicians all of whom have MBA orientation it stands for both Maha Bekar Adami and Major Bullshit Artist.

For the majority of our Wall Street and Dalal Street Pimps it stands for Major Bullshit Artist.

I think this article is highly inaccurate and PSU Banks themselves could have lent 2 lakh crores to Adani Groups since inception.

Interestingly Adani has raised another 13 billion recently (₹ 1.2 lakh crores) by pledging his shares in established companies like ACC and Ambuja cements.

So now (23/9/2022) the debt of Adani in just his seven publicly listed companies is 3.4 lakh crores. Only God knows how much debt he has in his unlisted private companies.

They would get to meet the savvy investors who helped make Adani’s commodities, energy and transportation empire the $255 billion stock-market juggernaut it is today, even when the combined annual net income of its seven publicly traded firms is less than $2 billion.

Why doesn’t any member of parliament raise a question and demand that PSU banks submit this information in parliament as to how much money has been lent by each of the PSU banks to Adani group companies and on what basis was approval given when even a simple analysis by a first semester pre-university commerce student in Simply Wall. St would uncover the following:

RISK ANALYSIS
Interest payments are not well covered by earnings
High level of non-cash earnings
Profit margins (1.1%) are lower than last year (2.3%)
Shareholders have been diluted in the past year 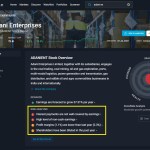 Only one established Indian newspaper, the Hindu Business Line has written an article about the danger of Adani debt and business model.

Can the Adani Group digest its debt?

Unaudited Networth as of 30/6/2022 is Rs 12,870.56 crores. Then what is the explanation for it to trade at a valuation of more than 20X at almost Rs 3 lakh + crores and a P/E of more than 400. This is trading at dotcom or tech company valuations without the corresponding exponential potential for growth.

Dec 15, 2022  The Ken magazine has some amazing articles on Adani and NPA trapeze artist scamming techniques.  It is worth having a subscription to The Ken magazine which is the best investigative website in India far better than other “scamster diggers”. 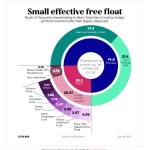 Interestingly, many of these FPIs are common across most Adani stocks. For instance, the FPIs with notable stakes in Adani Total Gas—Elara India Opportunities Fund, Albula Investment Fund, Cresta Fund, Lts Investment Fund and Vespera Fund—are in many cases investors in other Adani stocks too. Also, these FPIs seem to have stayed put in the Adani stocks, for the most part. In Adani Total Gas, for instance, they have been around at least since the stock’s listing in November 2018.
Ergo, exclude these FPIs, and the public shareholding is just about 5% or less in many Adani stocks including Adani Total Gas. So, the effective free float is quite low, and this scarcity drives the rally in the stocks, suggest the analysts. Also, conspicuous by their absence or sketchy presence in many of the shareholder lists are the large domestic institutional investors including mutual funds. One of the analysts mentioned above says, “The top public shareholders are virtually the same, many of them largely unknown foreign names. There is not a single well-known domestic institution with a large stake in many of these stocks.” Adani Total Gas did not respond to queries from The Ken, including on the reason for the significant FPI ownership.

The confounding rise and rise of Adani stocks (April 2022)

The above article is enough to open a very successful ED investigation into NRI Trapeze artist.  The Ken highlighted these intriguing shareholding changes in this above article since their path breaking article in 2022.

Gautam Adani’s oldest company is not his most valuable. But it dictates his future. (12th Sept 2022) 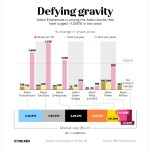 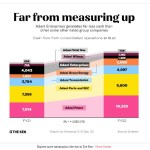 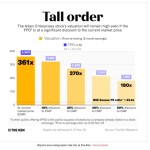 The flagship of Gautam Adani’s ports-to-data-centres empire has to raise more equity, but who will buy into a ridiculously high priced stock?
The company has seen its shares surge a mind-boggling 30X since the start of the pandemic in 2020. Its market capitalisation now stands at Rs 4,45,000 crore ($54 billion), earning it a place in the benchmark Nifty 50 index. The stock’s valuations are in the stratosphere. From the company’s perspective, it’s a great time to sell.
In April 2021, The Ken reported on the peculiar shareholding patterns in the Adani group companies, noting that several shared common foreign portfolio investors (FPIs). And strangely, several of them had negligible investments in non-Adani companies. As a result, the percentage of shares effectively available for trading by the public in the Adani stocks was very low. The Ken’s story set off a debate in mainstream media.
Since then, there has been a major rejig of foreign-investor holdings in the Adani stocks, ostensibly to combat criticism over shareholdings being concentrated in a few hands. The Ken highlighted these intriguing shareholding changes in April 2022.
With the planned equity issue now, the company hopes to increase public shareholding and silence the critics.
If you think I am being alarmist please also watch the following Youtube videos by star social media investor Akshat Srivastva.
Adani’s DEBT Problem is bigger than it seems. But, can it collapse the Indian Stock Market?
9 Stock Market Predictions for 2023
Akshat released the above videos in December whereas I have been researching Adani since 2013 and finally wrote my article in July 2022.

PS:
If you are wondering how to pronounce DFI – it is pronounced diffy.

What does the F stand for?